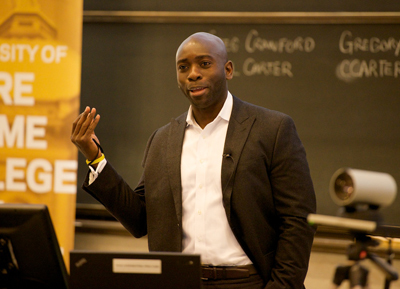 This past Saturday (Nov. 16), over 210 University of Notre Dame undergraduate and graduate students from across the university gathered in the Jordan Hall of Science for Diversity, Culture, Religion in Science, a one-credit, one-day course offered by the College of Science. The course aims to introduce students to the role of cultural and religious diversity in science, its importance in an era of globalization, and the interesting questions that it raises. To do this, the course invited speakers from diverse backgrounds to talk about how these issues have shaped their respective careers, and how these issues are shaping the future.

Frederick Biga, vice president at Goldman Sachs was the first speaker of the day. Biga, originally from Ghana, Africa, never thought he would find himself working at an investment banking and technology firm coming out of college. After graduating from Brown University with a Ph.D. in engineering, Biga was working at a career fair for Brown when he met recruiters from Goldman Sachs.

“I had no idea what Goldman was, but the curiosity of me wanting to build diversity and be open-minded led me to speak with them. When a lot of people think of diversity, they typically like to think about ethnicities and genders, but it’s also about the plurality of thoughts. So, I’m an engineer, I’m in science, but some guys were talking to me about finance and I embraced diversity and found out that that’s really what I wanted to do,” said Biga. 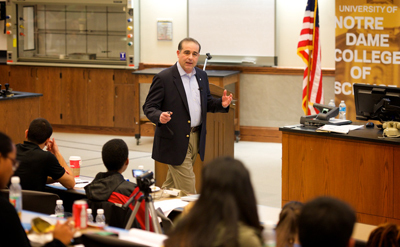 As part of an annual certification at Goldman Sachs, employees are required to have at least two hours of diversity training, which exposes them to different types of people and personalities. Biga shared his experience at a disability awareness session, and said that Goldman “doesn’t just talk about diversity, it practices it.”

The course also featured Kenneth Barrett, chief diversity officer, and Jocelyn K. Allen, director of regional, grassroots and diversity communications at General Motors (GM). As GM’s first chief diversity officer, Barrett brought his past experiences of working in a diversity role with large global organizations to GM. As diversity director for the Navy and the Department of Defense, Barrett saw and increase in the numbers of minorities and females working in the services and facilitated the  and established groundbreaking implementation of  work-life balance initiatives. 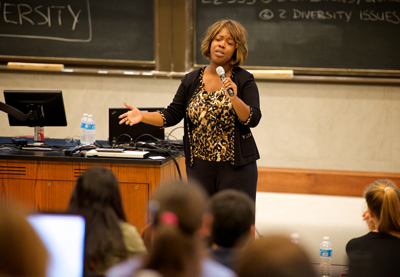 GM is currently at the forefront of diversity, acting as the first Fortune 500 Company to have an African American on its board of directors, one of the first major corporations to offer same-sex employee healthcare benefits, and created the first minority dealer program in the auto industry. Beyond minority-based initiatives, GM also offers employee resource groups that look to advance the company’s vision, mission, business goals and objectives, as well as the personal and professional interests of employees within the workplace.

For Jocelyn Allen, participating in the course was a homecoming of sorts as she returned to share her experiences with students at her alma mater. Beyond her work at GM in her hometown of Detroit, she shared that she had the honor of planning the funeral for the “first lady of civil rights,” Rosa Parks, while working in a previous role in Washington D.C.

“Interacting with a diversity group of colleagues and professors enhances the educational experience of our students and prepares them for success in the increasingly-diverse world in which we live, where they encounter people of many ethnicities, backgrounds, cultures and faiths,” explained Greg Crawford, dean of the College of Science. “Notre Dame is a place that takes religion seriously, and respect for diversity in religion is a natural part of our comprehensive approach to diversity and inclusion.”

“I really liked listening to Trey Lathe and Olivet Jones because they were very personable. They made diversity a subject I could relate to my life,” said Connor Hillery ’16, who attended the course.

This is the second year that Diversity, Culture and Religion in Science has been offered at Notre Dame. It is scheduled to be offered again during the Fall 2014 semester.