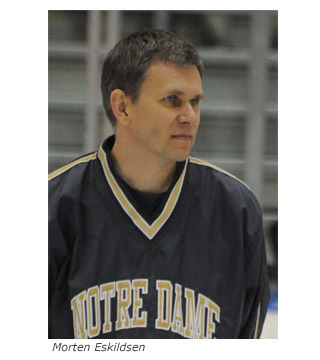 Morten Eskildsen, associate professor of physics, was chosen to be honored on “Favorite Professor Day” at the Irish hockey game on November 15 against Northern Michigan.

Eskildsen was selected by senior goaltender Tommy O'Brien who has taken Quantum Mechanics I and II, and Introduction to Mechanics I and II from Eskildsen. O’Brien said, "Not only was quantum my favorite class, but I'm also interested in his superconductor research and am currently doing research in his lab."

Eskildsen was honored during the first intermission along with other chosen faculty. As part of this recognition, he received a hockey puck autographed by O’Brien.