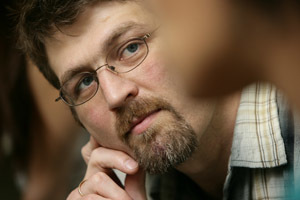 Michael Ferdig, professor of biological sciences, has published two papers on drug resistance in Plasmodium falciparum, the most severe malaria parasite responsible for hundreds of thousands of deaths in sub-Saharan Africa. His pioneering work was published in PLoS Biology as well as in PLoS Genetics, which includes results from his collaboration with malaria biologist Tim Anderson from the Southwest Foundation for Biomedical Research.

Ferdig takes the emerging “systems biology” approach, focusing on the whole genome rather than seeking a single gene responsible for the parasite’s agile resistance to drugs. New tools enable the discovery of the gene’s network and background, allowing a multi-pronged approach to the problem. Understanding the genes in their dynamic contexts opens more opportunities for attacking a web of targets that could help defeat the disease.

“We have to recognize biological complexity,” he says. “With genomic tools, we can begin to put meaning to this complexity and use it to redefine drug targets. It will redefine how we go after this parasite in a rational way. You essentially get an architecture of the controlling elements of the genome that determine drug resistance.” The genomic study maps the expression level of each of the parasite’s 5,300 genes. Research has discovered “hot spots” of regulation in the genome, such as a region of Chromosome 5 that can regulate hundreds of genes.

Ferdig, who earned a Ph.D. at the University of Wisconsin and did a post-doctoral fellowship at the National Institutes of Health, came to Notre Dame seven years ago. He heads the Genomics Core Facility and leads a team searching for new high-trajectory faculty in the field.