After several days of unrest in Port-au-Prince, many have inquired about how the situation has affected the Notre Dame Haiti Program and its activities with Congregation de Sainte Croix (CSC) Salt Project.

According to Fr. Michelet Dorescar, General Manager of the CSC Salt Project, the facility in downtown Port-au-Prince, which produces its fortified salt marketed under the trade name Bon Sel Dayiti, resumed normal operations on Tuesday, July 10, after being closed on the preceding Saturday and Monday.

Most importantly, all employees and their families are safe and were kept out of harm's way during the weekend protests.

Fr. Michelet further reported on the loss of the Bon Sel Dayiti delivery and marketing truck. It was destroyed during the unrest, which broke out after the truck had already left the facility. 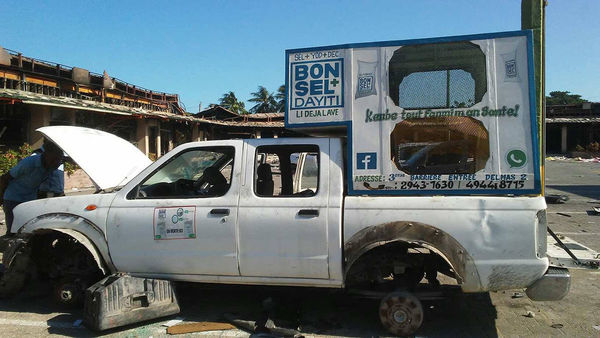 Fortunately, the driver was not harmed, however, the loss of the vehicle will be a temporary setback for marketing activities until a replacement vehicle is located and funded.

Despite this time of unrest, Fr. Michelet and his team remain dedicated to helping rid Haiti of Lymphatic Filariasis and Iodine Deficiency Disorders through the production and distribution of fortified salt.

Originally published by James Reimer at haiti.nd.edu on July 13, 2018.