During the one year anniversary of the death of Fr. Hesburgh, the College of Science recalls and appreciates the impact that he had on science at Notre Dame. 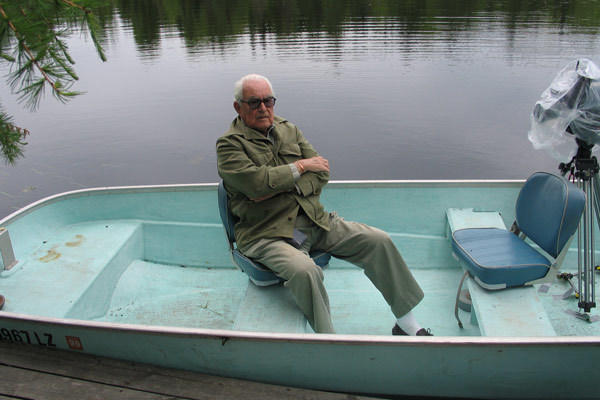 Notre Dame’s nearly 8,000-acre Land O’Lakes property in Wisconsin, originating with a 1,000-acre gift from philanthropist Martin J. Gillen in the 1930s and vastly expanded by Father Hesburgh, has been the site of high-impact gatherings hosted by Hesburgh. In 1959, a group of Northern and Southern political leaders who happened to be fishermen hammered out an agreement that became the basis of the Civil Rights Act; in 1967, a global collection of top educators issued the Land O’ Lakes Statement on Catholic higher education in America.

Today, the land is the site of high-impact environmental research UNDERC, the University of Notre Dame Environmental Research Center, which became one of 20 National Ecological Observatory Network (NEON) sites in 2013.

“UNDERC, with its pristine habitats, is a vital catalyst in facilitating and advancing the department’s research and education missions in the realm of environmental health,” said Crislyn D'Souza-Schorey, the chair of the Department of Biological Sciences.  “The work of our students and faculty inform policy on issues that are highly current and of regional and national significance.”

Hesburgh worked with former Notre Dame trustee Jerry Hank to develop the facilities. He played a key role in developing policies for the site even after his retirement as president, and even in his later years, he relished visits to the wilderness and its lakes for fishing, reflection, and conversation.

“He’d be a day or two up there and the next thing you know you had the old Fr. Ted back, full of great ideas,” says UNDERC Director Gary Belovsky, who participated in many of those fishing trips and talks. “This place just rejuvenated him something fantastically.”

Hesburgh developed a vision of using the property for research and education in the late 1960s. The first course offered on the property, in 1976, had six or seven students. Now, the summer class has 28 students each year, and some 60 researchers from 20 universities are on the site at the summer peak. Notre Dame faculty and graduate students are about 40 percent of the total.

“We’re wide open to being used by universities and government agencies across the country,” Belovsky says, adding that NEON has a staff of five to seven year-round and 20 in the summer. “It’s widely used by different universities. There’s probably two to three million dollars a year of research money spent through UNDERC.”

The longest-term study on the property, the Cascade Project that investigates dynamics in experimental lakes, is a collaboration between the University of Wisconsin and the University of Virginia that has operated since the 1970s. A Notre Dame faculty member collaborates with researchers from McGill University and the U.S. Geological Survey to study the effects of carbon that enters a lake from the surrounding forest.

Most of the newer projects are associated with NEON, where the NSF funds individual projects that employ the infrastructure across NEON several sites. One program, PALEON, involves faculty from Notre Dame, Harvard University, Boston University, and Duke University who study how forests changed after the last ice age, seeking insights about the effects of future change. The program includes a summer course at UNDERC every other year. A new NEON-related study by a Western Michigan University researcher, measuring microbes in the atmosphere, will start this summer.

“Each year we’re seeing more and more proposals going to the NSF that are asking to use our site,” Belovsky says. “Most everything now is connected to NEON.”

Belovsky, who earned an undergraduate degree at Notre Dame in 1972, recalled a two-hour meeting in Hesburgh’s office soon after he accepted the job as director in 2000.

“He wanted Land O’ Lakes and UNDERC to be viewed as a national center of environmental research and education,” said Belovsky, who won Hesburgh’s support for the rigorous NEON competition with Michigan State and Michigan.  “It’s developing into the sort of national resource that Fr. Ted envisioned.”