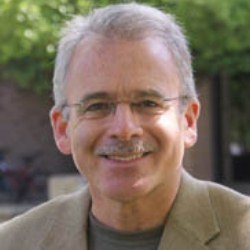 Gary Lamberti, professor of biological sciences, was recently appointed as a member of the Independent Science Advisory Panel for the Missouri River Recovery Implementation Committee (MRRIC).  The panel is responsible for advising the watershed management plan and aquatic recovery efforts for the Missouri River, the longest river in North America that drains ten states and two Canadian provinces and joins with the Mississippi River to form the fourth largest drainage system in the world.

Authorized by an act of congress, MRRIC was created to restore the lost habitat of the Missouri River and to help recover threatened and endangered species from decades of human impacts. The Independent Science Advisory Panel consists of six scientists with complementary expertise in river ecology, hydrology, geology, wildlife, and fisheries. The purpose of the panel is provide expert advice, scientific support, and technical management for projects of the MRRIC.  According to Lamberti, “The mission of the Science Advisory Panel is to provide the best scientific input to restoring one of the iconic rivers in the United States, where Lewis and Clark began their epic journey to the Pacific coast two centuries ago, to ensure the preservation of its ecological integrity while also providing critical services for the people living in the basin.”

Lamberti’s own research focuses on gaining a better understanding of the structure and function of freshwater ecosystems, primarily streams, rivers, and wetlands. As director of the Stream Ecology Laboratory at Notre Dame, he studies interactions among aquatic and terrestrial ecosystems, the ecology of aquatic organisms, responses of these ecosystems to environmental stressors, and the impacts of non-native organisms. Among his current projects include devising methods to restore impaired streams and rivers, assessing wetland ecological health, and studying the biological transport of contaminants by anadromous fishes. The lab has conducted research in locations ranging from Florida to Alaska.

In addition to this new role on the panel, Lamberti serves on several advisory boards for aquatic research institutes around the Great Lakes. He is a fellow of the American Association for the Advancement of Science and a past-President of the Society for Freshwater Science.