Some of the nation's leading mechanism theorists and experts in polynomial-system solving will converge at Notre Dame March 1-4 when the Department of Mathematics Center for Applied Mathematics host a conference entitled "Geometry of Mechanism Science."

The event focuses on the theory of mechanisms. Machines such as robots, cars, planes, lawnmowers, are basically assemblies of mechanisms. For example, cars include piston assemblies, windshield wipers, door and trunk mechanisms, brakes, to name a few. Another important class of mechanisms arise in the development of replacement body parts, e.g., heart valves and artificial limbs. 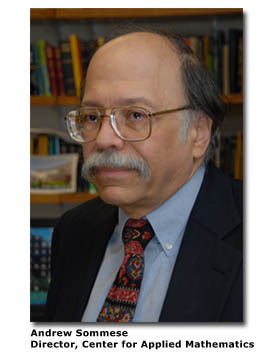 It is a remarkable fact that mechanisms are codified as algebraic objects defined by polynomial systems, i.e., collections of multivariate polynomial equations, which is the focus of the mathematical area called algebraic geometry.

In the last decade, there has been dramatic progress in the development of numerical methods to do algebraic geometric calculations, e.g., numerically find and analyze the solution set of a polynomial system.

Andrew Sommese, director of the Center for Applied Mathematics, said members of the center decided the time was right to catalyze the interaction of mechanism theory and algebraic geometry to a new level. To do this, the Center invited leaders of mechanism theory, such as Bernard Roth of Stanford University, to campus for a workshop that will give attendees ample time for interaction. To encourage this, talks are scheduled for all the invited engineers, but only for a few of the invited mathematicians. Roth, the leading kinematician in the world, will deliver the main address entitled "Mathematics and Mechanisms: A Marriage Made in Heaven" at 4:15 p.m. Thursday, March 1, in McKenna Hall.