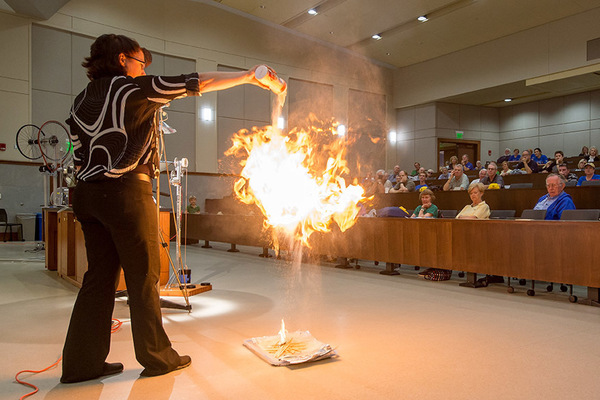 A common issue with the world of science is how much can we separate science from religion and spirituality. Professor Abigail Mechtenberg of the Department of Physics and the Center for Sustainable Energy, believes that the way we look at spirituality and its relationship to science, affects the solutions we obtain from science. She argues that energy today is based on our social constructs and as a result, we can’t ignore them. Mechtenberg’s own spirituality led her to use her passion for physics to make a positive impact on the world.

On Saturday, September 14, as part of the College of Science’s Saturday Science Exploration Series held each home game day, Mechtenberg presented a talk titled, “God’s Energy: Yesterday, Today and Tomorrow,” discussing how she is using physics to develop sustainable energy in Africa. As part of her presentation, Mechtenberg went through multiple experiments with the audience to illustrate the many ways we can conduct electricity. She said, “As long as you move magnets and coils, you can make electricity.” This can be done by using mechanical energy, thermal energy, nuclear energy, and many other methods. One of those ways is through the use of gravitational potential energy. Mechtenberg displayed how gravity can be used as a way to power light via a gravity tower. Using a pulley gadget, she simply added a small weight to the pulley and as gravity pulled the weight down, the friction from the pulley generated energy which powered a small lightbulb on top of the gravity tower. She emphasized how a simple process like this could bring great change to Africa.

According to Mechtenberg, 1.2 billion people in the world have no access to electricity. As for those who are fortunate enough to have access to electricity, 50% are using unreliable electricity. For example, in Africa, electricity used during surgical operations is unreliable. Far too often power goes out during a surgery. For someone on the operating table, having power and light could mean the difference between living and dying. Backup power generators help the situation, but they are not a means to sustainable energy. Using a simple concept like the gravity tower, if developed well, could be a cost efficient means to give those countries sustainable energy for years to come.

View the remaining lineup of lectures in the Science Exploration Series. The lectures are free and open to the public.