Erica Gonzales, a graduate student in the Department of Physics at the University of Notre Dame, was conducting her first telescope observations in California in October 2014 when she helped to discover and photograph a rare brown dwarf– an object with mass in between that of stars and planets. Working with her advisor, Prof. Justin R. Crepp, the Frank M. Freimann Professor of Physics, Gonzales was able to identify HD 4747 B as an important benchmark for studying objects somewhat smaller than stars.

In addition to her discoveries, Gonzales recently won a National Science Foundation (NSF) Graduate Research Fellowship to continue investigation in the field. Gonzales earned her bachelor’s degree at the University of California, Santa Cruz, where she worked with Prof. Greg Laughlin, a theoretical astrophysicist who studies exoplanets. She came to Notre Dame for graduate school because she wanted to work with Crepp, who leads a new observing program that combines the Doppler method with high-contrast imaging to ascertain the mass of substellar companions using orbital dynamics.

“Since I was a little girl…I’ve always been drawn toward the extraterrestrial,” she says. “When I learned of the projects Justin was going to give me, I was excited. At Santa Cruz, I had worked on theoretical atmospheres of planets. Brown dwarfs are these beautiful objects that fill in the gaps between stars and planets. The smaller of them are very similar to planets. It’s something I’ve fallen in love with.”

Gonzales and Crepp went to the California Institute of Technology in October 2014 to conduct observations remotely using the W.M. 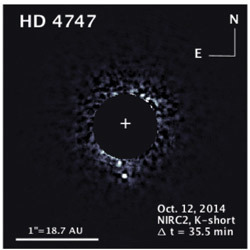 Keck Observatory in Hawaii. To prepare, she reviewed his database of past observations in search of a target and found that they were in the appropriate time frame to observe a suspected companion of the nearby star HD 4747. On the second half-night of observation, they collected information that, upon Crepp’s analysis, revealed the brown dwarf HD 4747 B. No other telescope had seen the object previously.

“I am now able to say that I helped discover one of the most important brown dwarfs in our field,” Gonzales says, adding that a more recent observation has suggested a possible second candidate. “Justin has taught me a lot about observations and how to be a scientist. We’re very fortunate to have access to different techniques that may be combined to make discoveries. This object is going to be very important. It’s going to be important to put constraints on how we understand the evolution of planets and cool stars across time.”