Three graduate students in the Department of Chemistry and Biochemistry were recently recognized for their outstanding research. 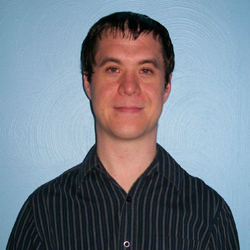 Nathan Meredith won a second place prize in the in the U.S. Department of Energy’s Innovations in Fuel Cycle Research Awards competition for the Open Competition in the category of Used Fuel Disposition. His award-winning research paper, “Synthetic Influences on Neptunium Incorporation in Naturally Occurring Copper Uranyl Phosphates,” was published in the journal Crystal Growth & Design in December 2012.  Meredith was one of 19 students nationwide to be recognized for work relevant to the nuclear fuel cycle.

Uranium compounds are expected to form at a nuclear waste repository if the waste containers are compromised.  It is possible that other radioactive elements in the waste will incorporate into these compounds thereby limiting the release of those elements into the environment.  Neptunium is a component of nuclear waste that is of particular concern, and Meredith’s research is focused on evaluating the factors that influence the amount of neptunium that can be taken up by various uranium compounds.  Meredith works with Thomas Albrecht-Schmitt. 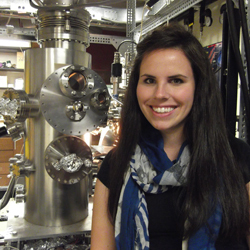 Rebecca Quardokus was the recipient of the 2012-13 Rohm and Haas Outstanding Graduate Research Award. The award was made in recognition of her exceptional productivity in research.

As a graduate student in Alex Kandel’s laboratory, her research used low-temperature ultra-high-vacuum scanning tunneling microscopy (STM) to study large mixed-valence iron-based organometallic molecules on gold surfaces.  She imaged the electronic properties of individual molecules using STM and found that the details of a molecule's internal structure determined whether it retained its asymmetric charge distribution when placed on a metal surface in the absence of bulk solvent. Quardokus earned her Ph.D. this year and is now a postdoctoral research associate in the Department of Chemistry and Biochemistry. 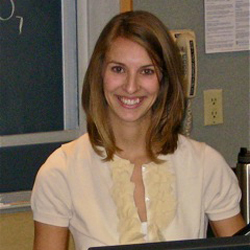 Erin Wilson was selected to participate in the 2013 American Chemical Society (ACS) Division of Organic Chemistry Graduate Research Symposium at the University of Delaware.  She is a member of Brandon Ashfeld’s lab and is working towards the development of methods that avoid the use of harsh reagents and minimize the need for purification from byproducts.  She used chlorophosphite reagents as dual-activating agents to drive a chemoselective rearrangement to afford the prevalent functional groups, amides and amidines. Bifunctional chlorophosphites are employed to activate carboxylic acids and azides to furnish a variety of amide compounds and an easily removable, water-soluble phosphoric acid byproduct. However, the mild reducing agent phenylsilane allowed for a catalytic variant of the amidation to be developed, which produced substoichiometric byproducts and further enhanced the ease of purification.

“The conference was a wonderful experience,” Wilson explained. “It was a great networking opportunity with professors and industry scientists, as well as my peers. Chemistry is a broad topic and has been implemented in some innovative and exciting applications.”