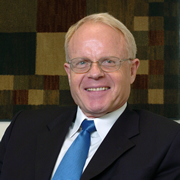 Hahn says that European universities are currently engaged in a wide ranging restructuring of their entire approach to higher education within the so-called Bologna Process. It is the two-fold aim of these reforms to create compatible and continent-wide curricula, credit hour systems, and degree programs and at the same time to promote student centered, technology enhanced instruction. The CTL Vienna is charged by the president of the university to lead this effort at the University of Vienna.

Hahn will bring an American perspective as well as his years of experience at the Kaneb Center to the deliberations of the Board.