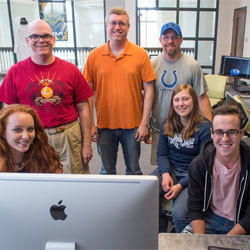 One such project is the development of a presentation of the Large Hadron Collider (LHC) inside the 50-foot diameter dome of Notre Dame’s state-of-the-art Digital Visualization Theater (DVT). Built by the European Organization for Nuclear Research (CERN) to allow physicists to test various theories of particle physics and high-energy physics, the LHC is the world’s largest and most powerful particle collider. Building on the work of QuarkNet students from summers past, Zoe Surma, Camille Goethals, and Oliver McNeil, spent their summer break developing an animated presentation on particle physics and the LHC, to be shown live in the DVT at the Jordan Hall of Science. In order to give the audience an idea of the LHC’s mammoth size, Surma developed a 3D animation showing the accelerator and its detectors relative to the size of Notre Dame’s football stadium, while Goethals and McNeil worked on animations illustrating what particle physics and high-energy physics are.

Specifically, Surma, of La Lumiere High School, updated an existing model of Notre Dame Stadium, to include the Campus Crossroads development. She modeled the additional buildings of Campus Crossroads from scratch, painstakingly incorporating each element of its design. Goethals, of Indiana Academy for Science, Mathematics and Humanities, was assigned the task of modeling a 3D animation of the Rutherford Experiment, which established the theory of the atom. McNeil, of New Buffalo High School, was tasked with creating a 3D animation illustrating electron orbitals, or the behavior of electrons in an atom.