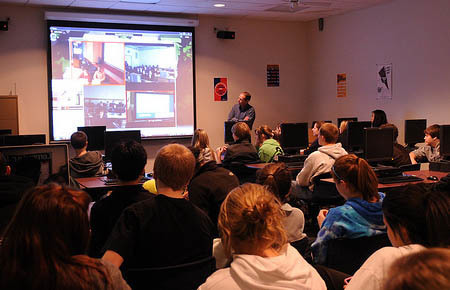 More than 140 South Bend high school students participated in a particle physics Masterclass on February 26 hosted by the Notre Dame QuarkNet Center, the US sponsor of the international initiative. South Bend students shared data and dialogue with students gathered at the University of Vienna and the University of Cincinnati, with moderators at Fermilab near Chicago.

The students in South Bend were sophomores and juniors from St. Joseph High School who attended three after-school meetings about particle physics, reviewed PowerPoint presentations online, and evaluated online images of collisions in the Large Electron-Positron Collider (LEP), the predecessor of the Large Hadron Collider (LHC) in a tunnel at the French-Swiss border. The students studied different decay modes of the Z-boson to identify the meaning of events and entered their conclusions into a database.

“They are looking at events, make determinations, doing counting themselves, coming to their own conclusions,” said Kenneth Cecire of QuarkNet, who facilitates Masterclass in the United States and was at Fermilab during the morning-long event. “They’re all analyzing the same data online, but they’re all coming to their independent conclusions.” The vast amount of data produced helps improve statistical confidence about the meaning of events.

Dan Karmgard, a Notre Dame Physics professor who does research with the Compact Muon Solenoid (CMS) at CERN, led a discussion on how to identify different events, based on such data as momentum and energy levels, before the global videoconference. “In the end, we don’t really know a lot of stuff. We compile a bunch of statistics,” he told the students. “For an individual event, no one knows exactly what it is. We’re going to take your results and they’re going to be statistically combined with the results of other students around the world.”

In the videoconference, students from each location discussed some events that they found most difficult to identify. They also saw a simulation of how scientists expect the Z-boson to appear in CERN’s Atlas detector and images from an event in the CMS in December, among the first events recorded from the LHC. That prompted a discussion of differences between the proton-proton collisions in the LHC compared to the electron-positron collisions in the LEP.