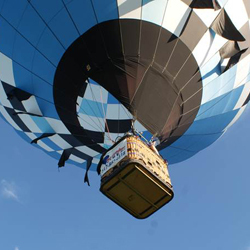 Jeremy Wegner, a teacher in the Notre Dame QuarkNet Program from Winamac Community High School will be on a hot air balloon flight to measure cosmic rays on Saturday, March 30.  The balloon ride, organized with the Purdue University QuarkNet Program, will be in the air north of Indianapolis for two hours to record muon flux as a function of altitude.

Saturday’s flight will replicate the historic flight of Victor Hess in 1912.  He was in a balloon 17,000 feet over Northern Bohemia and found evidence that the ionizing radiation that was detected on earth was actually coming from outer space.  Hess earned a Nobel Prize in Physics in 1936 for his discovery.