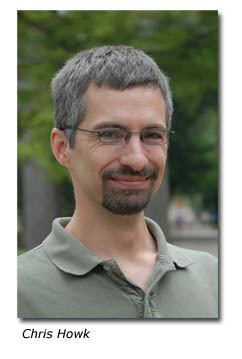 Assistant Professor of Physics Jay Christopher Howk has been appointed to the Science and Technology Advisory Committee (STC) for the Large Binocular Telescope Project (LBT). The LBT is a $200 million telescope in southern Arizona, and the largest telescope on a single mount in the world. The LBT project is an international collaboration between Germany, Italy, University of Arizona, The Ohio State University, University of Notre Dame and other US institutions.

Howk has been a member of the Notre Dame faculty since 2005 and was previously at the Center for Astrophysics and Space Science at the University of California, San Diego. His research interests include the astrophysical origins of the elements and the role gas plays in the evolution of galaxies and the universe. His work on these issues has made use of data from the LBT and several NASA observatories, including the Hubble Space Telescope and Spitzer Space Telescope.

The STC advises the LBT Board of Directors on the current and future science directions of the LBT project. This includes selecting proposals for consortium-wide science programs and developing the
future instrumentation for the facility. Recently, the STC recommended that the project build an adaptive optics laser guide star system that will allow the twin telescopes to compensate for the turbulence in the Earth's atmosphere, which normally limits the image quality. The
corrected images should rival those from the Hubble Space Telescope. Other instruments due to be delivered to the telescope in the next few years are infrared and optical spectrographs for the study of stars, galaxies and cosmology. There will also be two instruments that
ombine the light from the pair of large mirrors and allow direct imaging of extra-solar planets.

"This is a great opportunity for Notre Dame to interact with the larger LBT community and for both to get to know each other better. I expect to learn a lot about the science other LBT astrophysicists are
excited about," Howk said.