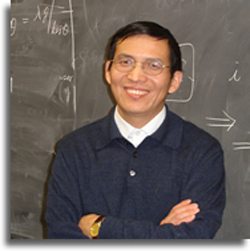 Jianguo Cao: January 25, 1960—June 23, 2011 GRANGER – Jianguo Cao, of Granger, Indiana, passed away on June 23, 2011, 2011 at the Center for Hospice Care in South Bend after a courageous battle with liver cancer. Cao was a professor in the Mathematics Department at the University of Notre Dame.

Cao was born in Kunshan, a southeastern city of Jiangsu Province in China, on January 25, 1960. He studied mathematics at Nanjing University, where he received his Bachelor of Science degree in 1982 and Master of Science degree in 1985. He then came to the US to pursue a Ph.D. in mathematics at the University of Pennsylvania under the direction of Professor Christopher Croke. After completing his doctorate in 1989, he received H. C. Wang Assistant Professorship and worked as an assistant professor of mathematics at Cornell University. He joined Notre Dame faculty in 1996 and became a full professor in 2001.

During his tenure at Notre Dame, Cao served on Committee on Appointment and Promotion and the Graduate Committee in the Department of Mathematics. He was very active in research and collaborations. He was a visiting member of the Institute of Advanced Studies in Princeton, the Mathematical Sciences Research Institute in Berkeley, Max-Planck Institute for Mathematics in Leipzig, Germany, and Institut Des Hautes Etudes Scientifiques in Paris, France. His was also a visiting professor at University of Michigan, Ann Arbor, and at Capital Normal University, Beijing, China. He received a Changjiang Chair Professor at Nanjing University in 2007. He was an internationally recognized scholar who received grants from National Science Foundation and was regularly invited to speak at international conferences.

Cao was a prolific researcher. He devoted his entire career to differential geometry, an area central to mathematics with close ties to the modern day physics. He contributed to a variety of important topics, ranging from the shape and structure of curved spaces to differential equations. His notable achievements include an extensive study of negatively curved spaces and studies that illuminate and clarify the issues related to the resolution of the famous Poincarè conjecture. He authored two books and was on several editorial boards including Proceedings of the American Mathematical Society. Outside of the profession of mathematics, Cao was an avid reader, especially in the fields of history and science. He enjoyed traveling around the world and learning different cultures. His hobbies include soccer and ping pong. He also liked concert music.

Jianguo Cao is survived by his wife of twenty years, Vivian Cao (Bin Zhao) and his son Alexander Cao, 16, of Granger, Indiana, his parents Shuquan Cao and Dingren Chen of China, and his sister Jianya Cao of China. He was preceded in death by his older brother Jianzhong Cao.

Donations in the memory of Jianguo Cao may be made to: Alexander Cao Education Fund. Donations can be deposited at any branch of First Source Bank or mailed to: First Source Bank, 6909 North Grape Road, Mishawaka, IN 46545, USA.