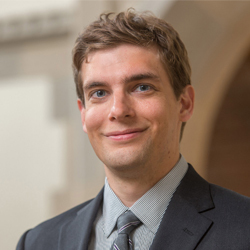 Assistant Professor Robert Rosenbaum, in the Department of Applied and Computational Mathematics and Statistics (ACMS), coauthored a paper that was recently published in the journal Nature Neuroscience titled “The spatial structure of correlated neuronal variability.” In the paper, a culmination of research in collaboration with the University of Pittsburgh, the scientists propose an extension of "balanced network theory" to explain relationships between the seemingly random activity of neurons in the brain.

In the future, this model could help scientists understand brain activity associated with learning or disease. According to Rosenbaum, “This project started as a collaboration between three mathematical biologists. Using computer simulations and the mathematical theory of stochastic processes, we made a surprising prediction about the relationship between neurons’ activity patterns in the brain. Two experimental biologists then joined the collaboration to test our prediction in real neural data. We were excited when we found the predicted relationship in the data.”

Rosenbaum and his collaborators received funding for this research from National Science Foundation. Additional support was provided by the National Eye Institute, Research to Prevent Blindness, the Eye and Ear Foundation of Pittsburgh, and the Simons Foundation.

The paper can be viewed on the Nature Neuroscience website.