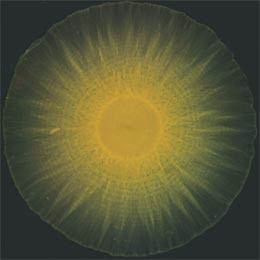 “Going back and forth is beneficial,” says Alber, the Notre Dame Chair in Applied Mathematics, concurrent professor of physics and director of the Center for the Study of Biocomplexity. “If you’re looking at individual bacteria, you can think that the beneficial behavior for one bacterium would be to keep on moving in one direction. But it’s going to interfere with the swarming behavior of the population because behavior results in the formation of traffic jams.” The myxobacteria are elongated and move by propelling themselves with slime from the back and reaching out with pili in front to grasp other cells and pull. They reverse the direction of their motion every eight minutes by cutting pili at one end and re-growing them at the other and starting producing slime at the opposite end.

The team developed a computational model to simulate the swarming of myxobacteria and demonstrated that a reversal every eight minutes was optimal to coordinate the movement of the cells that would avoid traffic jams, resulting in the maximal swarming rate. Reversals with other periods would leave the cells interfering with each other. Experimentation showed that the myxobacteria do conduct the reversal every eight minutes, suggesting that the biochemical circuit regulating reversals evolved under selection to maximize the swarming rate. The simulation was necessary because no mutant that always moves in one direction exists.

The study shows that periodic reversal of individual bacteria gives myxobacterial colonies the capacity to build complex, orderly, multicellular structures and to optimize their swarming ability. The research, supported by the National Science Foundation, could provide insight on similar movements of individuals in groups – the schooling of fish, the flocking of birds, the swarming of insects and even human and robotic traffic. The researchers point out that these fundamental problems have yet to be solved for any organism, and new results obtained for bacterial swarming would interest a broad range of biological and physical scientists as well as traffic and robotics engineers.