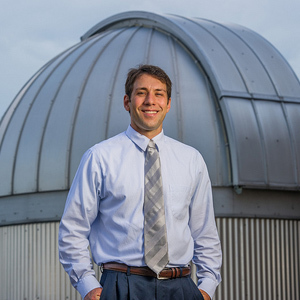 The iLocater instrument being developed by Justin R. Crepp, the Freimann Assistant Professor of Physics at Notre Dame, has been featured by the SPIE, the International Society for Optics and Photonics, in a newsroom article describing the detection of planets around other stars. The article by Crepp, entitled “Renaissance of the Doppler technique for exoplanet studies,” was published online on Sept. 10 by SPIE and describes how new hardware will enable breakthroughs in instrumentation performance that could lead to the discovery of nearby worlds that might resemble the Earth.

Unlike previous planet-finding spectrometers which operate with blurry images, iLocater will use adaptive optics to overcome the effects that limit traditional Doppler instruments from reaching their full potential. By sending starlight into the spectrometer via tiny (single mode) optical fibers, iLocater will circumvent a number of issues that preclude existing instruments from measuring subtle radial velocity variations caused by orbiting planets.

Crepp’s team is slated to begin crucial tests of their equipment at the Large Binocular Telescope (LBT) next month. The light from one of the 8.4-meter (28-foot) diameter telescopes will be captured by an acquisition camera and injected into a single-mode fiber that is one-tenth the thickness of a human hair (6 microns). Afterwards, light will be separated into its rainbow of colors by the spectrometer, not at visible wavelengths but instead the infrared where the smallest stars in the galaxy emit most of their light. The fiber is used to transfer starlight away from the telescope’s environment where vibrations and temperature and pressure changes can distort measurements. Further, using single-mode fibers also avoids the effects of “modal noise” caused by starlight interfering with itself as is seen in larger fibers.

“Adaptive optics is like a pair of glasses for the telescope,” Crepp says. “You need that pair of glasses to get the light into a tiny fiber. If you can do that, your signal will be very pure and allow you to find planets that would otherwise be buried in noise. This turns out to be feasible if you’re making measurements from the LBT which has arguably the best adaptive optics system in the world.”

In addition to describing the benefits of adaptive optics in the SPIE article, Crepp’s iLocater instrument was also mentioned in a recently-published comprehensive (110 page) study of the Doppler method by NASA’s Exoplanet Program Analysis Group (the ExoPAG). An iLocater-like instrument is listed as one of only four bullet point recommendations made by the ExoPAG that U.S. astronomers need in order to advance research and discovery in the area of planet detection and characterization. This recommendation led SPIE, a 60-year-old international society advancing an interdisciplinary approach to the science and application of light, to request the article by Crepp.