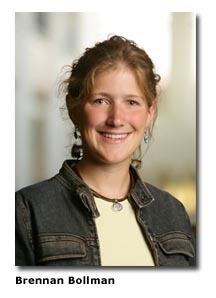 While on campus, he met with several groups of students.  Here, he is interviewed by Brennan Bollman, a biology major from the class of 2009.  After graduation, Brennan plans to attend medical school, and hopes to work as a physician in Haiti.  She said, “From reading Dr. Farmer’s work, I’ve received an incredible framework for approaching issues of social justice.  Meeting him affirmed for me even more that these problems can be solved if our attitude is, as he would say, one of ‘pragmatic solidarity with the poor.’”

Farmer has dedicated his life to treating some of the world's poorest populations.  A founding director of Partners In Health, an international non-profit organization that provides direct health care services and undertakes research and advocacy activities on behalf of those who are sick and living in poverty. Farmer and his colleagues have successfully challenged the policymakers and critics who claim that quality health care is impossible to deliver in resource-poor areas. 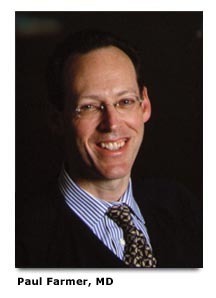 Farmer began his lifelong commitment to Haiti when still a student, in 1983, working with villages in Haiti's Central Plateau. The following year he began medical school at Harvard, and two years later helped found Zanmi Lasante, which has grown from a one-building clinic in the village of Cange to a multiservice health complex that pioneered the treatment of both multidrug-resistant tuberculosis and HIV in Haiti.  His work was key in helping Haiti to be among the first group of countries to qualify in 2002 for money awarded from the Global Fund to Fight AIDS, Tuberculosis, and Malaria.  Based on this model of comprehensive, community-based health care, PIH has developed partnerships in Peru, Russia, Boston, Rwanda, and Lesotho.

Farmer has written extensively about health and human rights, and about the role of social inequalities in the distribution and outcome of infectious diseases. He is the author of several books including: Pathologies of Power, Infections and Inequalities, The Uses of Haiti, and AIDS and Accusation.