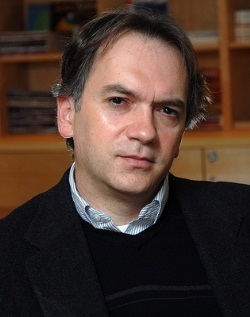 Boldizsár Jankó, professor of physics and director of the Institute for Theoretical Sciences, has accepted an invitation to serve on the advisory board of Physica C: Superconductivity and its Applications, a journal that reports on novel developments in the field of superconductivity. The peer-reviewed papers published in the journal cover topics such as the discovery of new superconducting materials, the physics of vortex matter, and the enhancement of critical properties of superconductors.

The advisory board of Physica C is made up of esteemed researchers in superconductivity, and Jankó was selected for his specific scientific expertise and knowledge of the research community.  As an advisory board member, Jankó will identify topics of interest for papers or special issues, serve as a reviewer, and provide advice on the editorial policy and strategy of the journal.

Jankó leads the condensed matter theory group in the Department of Physics. The group studies many areas in this field, including spin control, manipulation and transport (spintronics); nanoscale superconductivity and magnetism in metallic and semiconductor quantum dots and quantum wires; and novel superconductivity (MgB2, high temperature superconductors) and magnetism (diluted magnetic semiconductors).  Jankó joined the University in 2000 and was named an Alfred P. Sloan Fellow in 2003.