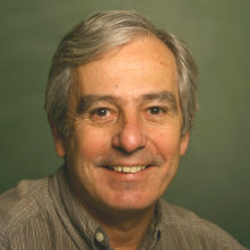 ND Energy affiliated faculty member, Jay LaVerne, professional specialist at the Radiation Laboratory and concurrent professor of physics, has joined a “dream team” of experts to study the chemical reactions that cause nuclear waste to change over time, with the goal of identifying safe, permanent storage for the radioactive material. The nuclear waste is left over from the Manhattan Project, a research and development project that produced the first nuclear weapons during World War II.

IDREAM (Interfacial Dynamics in Radioactive Environments and Materials) Center, is one of four new Energy Frontier Research Centers named by the U.S. Department of Energy Office of Science to better understand the chemistry of radioactive waste. This $12 million dollar initiative is led by Sue Clark, a researcher at the Pacific Northwest National Laboratory in Richland, Washington, where the material has been stored for decades.

“The idea is to bring in a variety of different people who each have their own expertise and build a common team that can approach the problem from a multifaceted point of view,” LaVerne says. “It’s much more than any one person can hope to tackle.” LaVerne received a grant of $448,000 for his role in the project, in which he will study radiolytic decomposition, or how radioactivity dissolves aluminum oxides, in the watery, highly alkaline environment of the waste tanks.

Although the original content of the tanks is documented, radiation induced chemical processes have altered the material in unknown ways. “They continue to be modified as time marches on,” says LaVerne, an expert in radiation chemistry who came to Notre Dame 37 years ago. “What will we have to do to clean the tanks up, to change the waste into a form that we can safely store away so that we don’t have to worry about leaching into groundwater or other environmental concerns?” The knowledge gained could help with smaller repositories of waste elsewhere, including sites in Idaho and South Carolina.