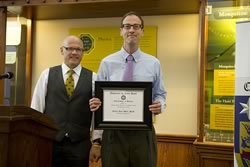 Dean Greg Crawford presented the 2012 Father James. L  Schilts, C.S.C./ Doris and Eugene Leonard Teaching Award to Jeffrey Diller, professor of mathematics, at the annual Dean’s Awards Luncheon.  Over 180 students, family members, faculty, and staff were in attendance at the annual event on May 18, 2012 in the Jordan Hall of Science Galleria.

Diller earned the Schilts/Leonard Teaching Award for salutary influence on students in and out of the classroom.

“Prof. Diller is an amazing professor who really cares about his students.  He always keeps lectures interesting and shows that he clearly loves his research and teaching,” describes one of his students.

Diller has received a number of teaching awards throughout his career, including the Kaneb Teaching Award in 2003 and the Joyce Award for Undergraduate Teaching in 2008.

This award was named in honor of Father James Schilts, C.S.C., who taught in the Department of Physics from 1961 until 1982.  The award is presented annually for excellence in teaching at the undergraduate and/or graduate level.