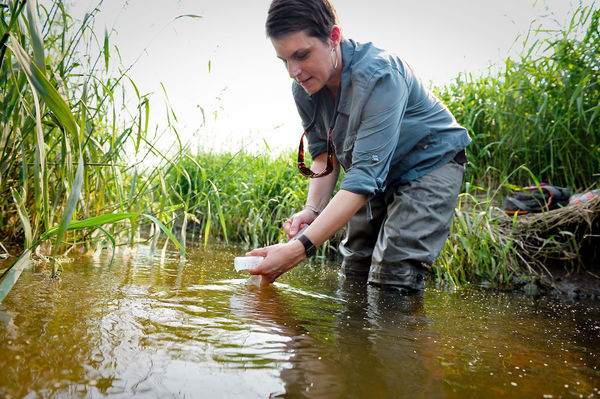 Jennifer Tank, Galla Professor in the Department of Biological Sciences at the University of Notre Dame and director of the Environmental Change Initiative, has been announced as the president-elect of the Society for Freshwater Science (SFS).

The leadership role involves a three year commitment to the society, with this year spent “getting her feet wet” as a member of the society’s Executive Committee, before Tank assumes the presidency in May 2018 from current president, Colden Baxter. From 2018-2019, she will serve in the past-president role to advise and ease the transition to new leadership.

SFS is an international scientific organization dedicated to studying and promoting further understanding of freshwater organisms and ecosystems, connections between freshwater ecosystems and surrounding landscapes, and the physical processes that affect them. Today the society is approaching 1,800 members of varying disciplines across seven regional chapters.

Being raised by a biology teacher along the shores of the Great Lakes, freshwater has long held a special place in Tank’s life. While attending Michigan State University, it was with the help of a Stream Ecology course and mentorship by senior scientists that first led her to the society. “I’m fortunate to have found SFS in the early-stage of my career; it is my professional home and my extended scientific family,” said Tank.

Inspired by the past and present leadership of SFS, Tank hopes to expand membership by attracting more disciplines, backgrounds, and regions with a special focus on growth in graduate student members and early career scientists. “I think that sustained membership engagement can create positive momentum to grow our numbers,” said Tank. “Strategic thinking, communication, and leadership training workshops can be game changers.”

At Notre Dame, Tank also leads the Indiana Watershed Initiative (IWI) where researchers are exploring how conservation practices like cover crops and restored floodplains can mitigate the influence of agricultural land use on freshwaters. The project engages key partners like local farmers and natural resource managers, conducting watershed-scale experiments on working lands, and quantifying the water quality benefits in a real world setting.

Tank’s experience conducting ecological research on working lands has influenced how she sees the future role of SFS moving forward. “I believe the society and its members are a key source of information for science-based decision-making around freshwater management and conservation, which builds on historic strengths in promoting freshwater science through education and outreach” said Tank.

“The collective experience at SFS, coordinated with other aquatic societies, can serve as a clearing house for knowledge that supports efforts by the private sector, NGOs, and government agencies to sustain the future of our freshwaters,” said Tank.­­­ It is her hope that her service in the SFS leadership role will help the society flourish in these and other efforts.

Originally published by Alex Gumm at environmentalchange.nd.edu on September 11, 2017.