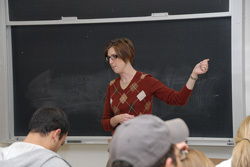 Jessica Hellmann, associate professor of biological sciences, has been named a 2011 Leopold Leadership Fellow. Hellman is among 20 mid-career academic environmental scientists named as Fellows this year. The group was selected through a highly competitive process on the basis of their exceptional scientific qualifications, demonstrated leadership ability, and strong interest in communicating science beyond traditional academic audiences.

The Leopold Leadership Program, located at the Woods Institute for the Environment at Stanford University, was founded in 1998 to fill a critical gap in environmental decision making: getting the best scientific knowledge into the hands of government, nonprofit, and business leaders to further the development of sustainable policies and practices.

The Fellows will take part in intensive leadership and communications training designed to hone their skills in delivering scientific information to decision makers, the media, and the public. They also become part of a network of past Fellows and program advisors who are leaders in conducting scientific outreach beyond traditional academic and scientific circles. More information about the program is available at http://leopoldleadership.stanford.edu/.