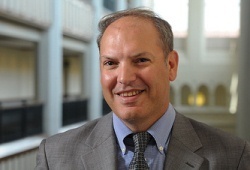 He will lead the U.S. operations on the electromagnetic calorimeter at Compact Muon Solenoid Detector (CMS) . The CMS is one of two giant detectors that image the proton collisions from the 16 mile circumference of the LHC and was most recently used to discover the Higgs boson. The calorimeter is a device within the CMS consisting of 76,000 scintillating crystals, built at a cost of $150M, and designed to precisely measure the energies of photons and electrons produced in the high energy collisions. The Notre Dame group played a central role in the recent discovery of the Higgs boson by using the calorimeter to detect Higgs bosons decaying to two photons.

"We plan to take data continuously from 2015-2018 at 14 TeV which will be the highest energy collisions," said Jessop. "We will continue our studies of the Higgs boson, but the new higher energies will allow us to search for new particles and forces that have long been predicted. The calorimeter will be vital for that program but it takes a great deal of work to maintain and operate."

Additionally, Jessop was recently appointed to manage the upgrade studies for the electromagnetic calorimeter for the long term future. "We expect the LHC to continue running until 2035. At the moment we are evaluating whether it will function adequately beyond 2021 due to the intense radiation it receives. We are considering replacing it with newer technologies that are more radiation tolerant."

Originally published by Shelly Goethals at physics.nd.edu on April 30, 2013.