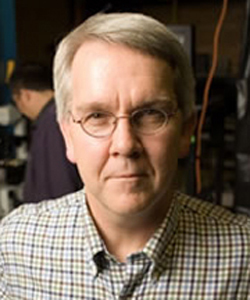 Bohn studies chemical and biochemical measurement science, focusing on mass-limited samples that range from a single molecule to a few million molecules in size. The challenge is to design and build instruments with the requisite precision to control the samples in space and time on scales of a billionth of a billionth of a liter.

Fifteen years ago, doing research on electrically releasable drug modalities, Bohn and his colleagues serendipitously discovered the ability of small liquid–containing structures to exclude an electrical charge, a quality useful for directing the motion of fluids, like an electrical diode controls the flow of electrons. Now, nanocapillary array membranes can be combined with microfluidic channels to manipulate incredibly tiny fluid packets without the use of moving parts. The researchers build their own nanoscale containers with polymers, or polymer–metal combinations, that enhance the ability to simultaneously sense the presence of the important species, control their position and even alter their chemical structure on demand.

“We really now have a much better handle on the basic physics of fluid transport at the nanoscale,” Bohn says. Among other things, nanopores could be used to generate chemical reagents and use them directly at the site where they are made, without the need to transport them. The technology has potential application to fields as divergent as pollutant remediation and drug assays.