The award, the highest teaching honor bestowed by the college, is given for excellence in undergraduate or graduate teaching. 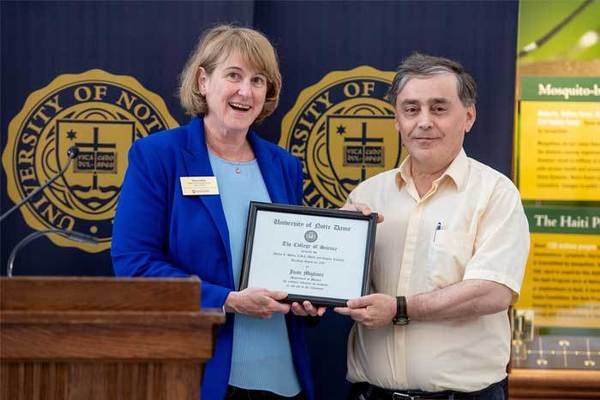 “Professor Migliore’s students praise his passion for mathematics and consistently observe that he makes extremely complex mathematical concepts easy to understand,” said Mary Galvin, the William K. Warren Foundation Dean of the College of Science. “In addition to his clarity, students uniformly comment on his patience and kindness.”

Migliore graduated from Haverford College with a bachelor’s degree in mathematics and earned his doctorate from Brown University in 1983. He joined the University in 1989 and served as the associate chair of the Department of Mathematics in 1995-1996 and from 2008-2016. He also served as director of undergraduate studies from 2000-2004.

The award, given annually to a faculty member in the College of Science, is named in honor of Father James Shilts, C.S.C., who taught in the Department of Physics from 1961 to 1982. The award was endowed in 1984 by Eugene T. Leonard III, a member of the Science Advisory Council from 1976 until 1991, in memory of his parents, Eugene and Doris Leonard.

“In all his teaching, Professor Migliore is as devoted to his students as he is passionate about his mathematics.,” said Jeffrey Diller, chair of the Department of Mathematics.  “Among his many virtues, his students consistently name generosity, kindness, and approachability.”