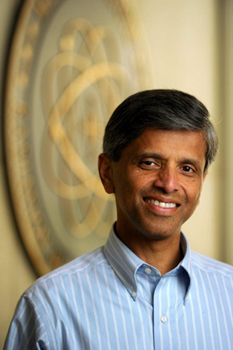 Prashant V. Kamat, the Reverend John A. Zahm Professor of Science, has been listed among the Top 100 Chemists, based on average citations for papers published in chemistry journals since 2000. Kamat is No. 58 on the list, with an average of 64.9 citations per paper. The list was compiled by Times Higher Education of the United Kingdom.

Kamat, who earned his Ph.D. at Bombay University and worked at Boston University and the University of Texas at Austin, came to the University of Notre Dame nearly 30 years ago. He has published numerous papers with international collaborators and is an honorary visiting professor at Kyoto University. His work, funded by the Department of Energy and conducted in the Notre Dame Radiation Laboratory, involves the development of light-harvesting assemblies made of molecules and nanomaterials for next generation solar cells.

Another Notre Dame professor, Joan Brennecke of the College of Engineering, is No. 45 on the Times list, with an average of 74.26 citations per paper.