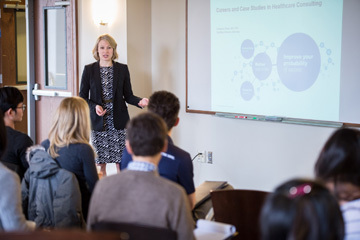 Katherine Ward enrolled as a graduate student at Notre Dame with her sights set on academia and work that would help people like her father, who had long suffered from serious back pain.

She had watched for many years as his diagnosis would change, but the pain wouldn’t go away. With a love of science — and a bachelor’s degree in chemistry — already ingrained, Ward set herself on a path toward a Notre Dame doctorate in biochemistry and a career in a laboratory where she hoped to uncover methods for treating degenerative diseases.

But Ward didn’t know what she didn’t know. Specifically, the picture in her head of being a scientist was the only one she really had. And when she got to Notre Dame, she found a place where paths fork and other come together in ways she had never imagined.

While pursuing that Ph.D, Ward heard about the ESTEEM program, a master’s degree in entrepreneurship in which students take ideas from the concept stage through the process of launching a startup company. In Ward’s case, this was the convergence of two paths – science and business — that she hadn’t been familiar with.

Enrolled in ESTEEM while working on her doctorate, Ward found a niche where she was able to use her science knowledge in a business setting. All of a sudden, she saw an opportunity to broaden her reach and once again help people like her father, but in a way that employed the skills with which she was most passionate.

“It wasn't the right path for me. I was drawn to industry because it seems to embody more of the business and entrepreneurial skills that I felt could have a greater impact on healthcare."

Ward is now a consultant in Advisory Services at Quintiles, the world’s largest provider of product development and integrated healthcare services, including commercial and observational solutions. Ward works with clients to develop strategies to improve patient access to therapies, new product acquisitions and other commercial strategy projects.

Her science background means she can keep up with technical details, but her business skills allow her to communicate authoritatively on that science to guide companies that will touch the lives of possibly millions of patients.

“I really love to communicate about things that can be complex and technical, to put things in layman’s terms. That’s something scientists should work harder at, no matter what direction their career path is headed” Ward says. “Projects I’m working on and what I and my team recommend can be rolled out globally for a client. That’s really cool. Your work, your idea can be rolled out on a national or global level.”

Her work’s reach has also had impact on a much closer level. Ward learned about a disease called ankylosing spondylitis, an inflammatory disease that causes the vertebrate in the spine to fuse together. Her father had a specialist investigate, and he now has an accurate diagnosis.

Now based in New York City, Ward is getting used to big-city life, but she still makes her way back to South Bend when she can to give talks or help however she can. For her, it’s important to be part a vibrant and active alumni community that has already helped guide her post-graduation, including introducing her to her current employer.

“I take it really seriously. I come back to campus and try to help other scientists and students,” Ward says. “The alumni network is fantastic. You get an alumni network, but it’s what you do with it that allows you to make jumps in your career.”