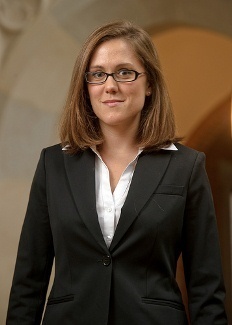 Katie Grayshan, a mathematics graduate student working with Alex Himonas, professor of mathematics, has expanded on the research of her adviser and his collaborators with her work on partial differential equations (PDEs).

Varieties of PDEs are used to model a number of phenomena, ranging from climate change to disease progression, changes in the stock market, and the evolution of tsunami; they allow us to make educated decisions about environmental policy, medicinal treatment plans, investments, and more. Many of these equations are non-linear and require challenging case-by-case study.

One celebrated non-linear PDE is the versatile Korteweg-de Vries (KdV) equation, derived in 1895, which can describe and predict the behavior of a tsunami. The KdV has certain flaws -- such as the inability to model breaking waves -- which were rectified by the Camassa-Holm (CH) equation, derived in 1993. CH has special solutions, called peakons, which look like pointed traveling waves and mimic the behavior of waves of great height.

Grayshan's research focuses on fundamental questions about the b-family of equations, an infinite collection of equations which includes CH. Given a profile of a wave, she addresses whether there exists a solution to the b-family equation with this initial profile, whether the solution is unique, and whether the solution is stable. Professor Himonas and his collaborators have answered similar questions about two members of the b-family; Grayshan has extended their work to include the entire b-family, introducing new techniques that did not rely on the specific structure of the two examples they considered. [1]. Grayshan's most recent article [2] investigates the stability of solutions to the Novikov equation, another shallow water equation.

[2] K. Grayshan, "Peakon solutions of the Novikov equation and properties of the data-to-solution map," Journal of Mathematical Analysis and Applications, Accepted.