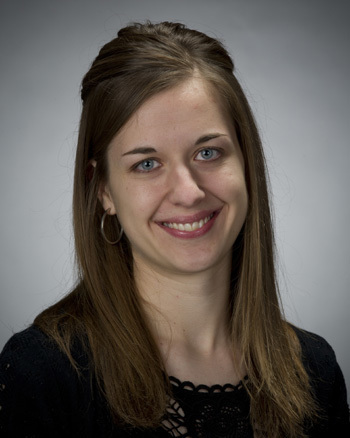 Kelsey Weigel, a second year graduate student in the Department of Biological Sciences, has received a Women in Cancer Research (WICR) Scholar Award.  This travel grant will be used for Weigel to present her research at the American Association for Cancer Research (AACR) Annual Meeting. The AACR Annual Meeting is the largest cancer research meeting in the world and brings together researchers from across the globe. This year’s meeting will be held in Washington, D.C. from April 6-10.

Scholar awards are given annually to WICR members who are scientists-in-training and presenters of meritorious scientific papers at the AACR Annual Meeting. Female graduate students, medical students or residents, clinical fellows or the equivalent, or postdoctoral fellows, are eligible for the award and the selection process is highly competitive.

Working in the laboratory of Zachary Schafer, the Coleman Assistant Professor of Cancer Biology, Weigel studies the microenvironment contributions to the progression of cancer. Specifically, she looks at the proteins secreted by carcinoma-associated fibroblasts (CAFs) and studies how they contribute to epithelial cell survival in detachment. Surviving detachment from the extracellular matrix is a capability that is paramount to the survival of cancer cells in all stages of the metastatic cascade, and Weigel has worked to identify a unique and novel mechanism by which CAFs secrete IGFBP-2 and ultimately promote epithelial cell survival in detachment. This discovery identifies IGFBP-2 as a novel target for new chemotherapeutics designed to promote cell death in breast cancer cells.

Weigel earned a Bachelor of Science in Biological Sciences and a Bachelor of Arts in Spanish from Rockhurst University in 2011. Service has played a very important part of Weigel’s life outside of her graduate studies. She volunteers weekly at a therapeutic riding academy outside of South Bend. She has also traveled to Honduras every year since 2009 year to volunteer at an orphanage around the holiday season.