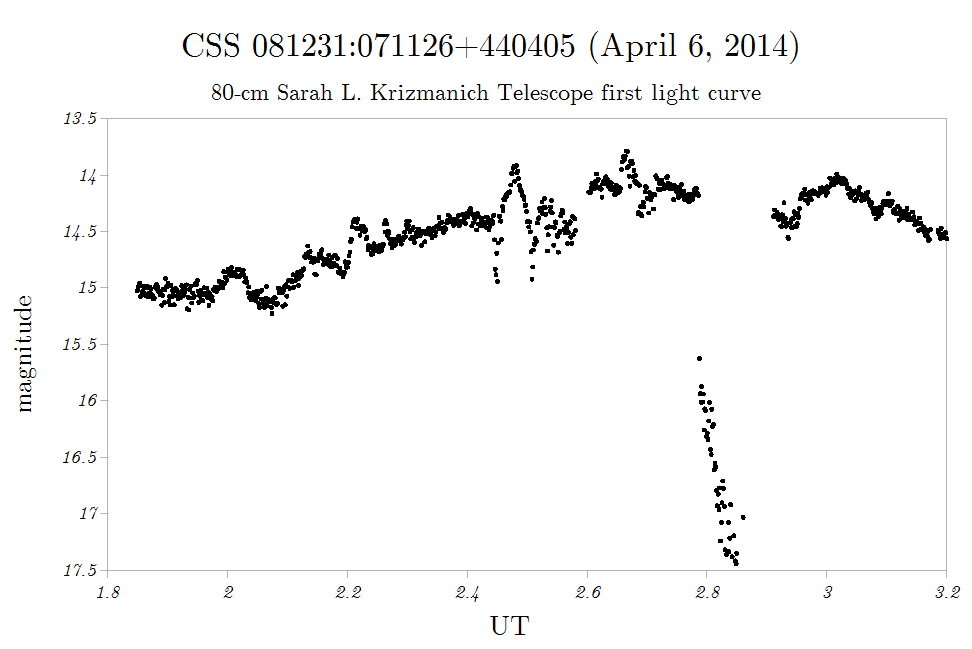 The graph illustrates light curve Littlefield has observed.
The eclipse occurs around UT 2.8 in the plot.

Colin Littlefield, a third-year law student at Notre Dame, has been one of several researchers testing the University’s brand new Sarah L. Krizmanich Telescope, an 0.8 meter telescope that was installed on the rooftop of Jordan Hall of Science in September 2013. Throughout the testing, he has observed an object known as CSS 081231:071126+440405. “Despite its awkward name, it's one of the more interesting astronomical objects visible from South Bend because it appears to vanish for several minutes every two hours,” he explained. This is the first scientific data to be obtained from the Krizmanich Telescope since it was installed.

An animation of the cataclysmic
variable that Littlefield observed.

The Krizmanich Telescope is not fully operational yet, but Littlefield’s observation of the cataclysmic variable is an example of the potential of the telescope and impact it will have on astronomy research at Notre Dame.

“The brightness of an object can change dramatically on a time scale of seconds. It is important to take measurements as rapidly as possible, which is why the Krizmanich Telescope was so useful for these observations,” Littlefield explained. “If I had used a smaller telescope that collects less light, I would have needed to use longer exposures, resulting in lower time resolution. I've shared these observations with a German astrophysicist who is writing a paper about this particular star.”

Littlefield has had a long-standing interest in astronomy.  As a freshman at Notre Dame in 2007, his professor, Peter Garnavich, really recognized his passion for the field and invited him to get involved in research. They have worked together for the last seven years throughout Littlefield’s undergraduate and law school careers. Littlefield’s research experience has inspired him to change career paths and he will be attending graduate school in the fall to study astronomy.

Students interested in visiting the Krizmanich Telescope and the observatory are encouraged to attend the Physics Club’s Geek Week event on Thursday, April 24. The observatory will open at 9 p.m.