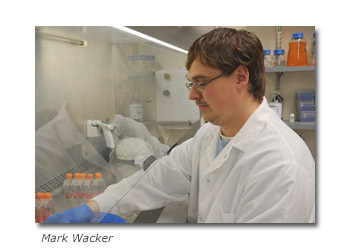 Mark Wacker, a fourth-year graduate student in the Eck Institute for Global Health, has won an award for Best Young Investigator Presentation at the American Society of Tropical Medicine and Hygiene Conference in Washington, D.C. Wacker, who is also a trainee on an NIH Chemistry Biochemistry Biology Interface (CBBI) training grant, is advised by Michael Ferdig. His research suggests the function of one of the main genes in a malarial parasite involved in the parasite’s drug resistance.

“We’re looking at the whole metabolism of the parasite,” Wacker says. “Nobody had any idea what the protein was supposed to do in the first place. We may have worked out that it’s transporting small peptides. A better understanding of how this protein is working should help us target it in the future.” The next step involves an integration of the vast array of data known about metabolites and gene expression in the parasite.

Wacker conducted research in collaboration with the lab of Manuel Llinas at Princeton University, and his travel to work in New Jersey was supported by the CBBI program. The conference in Washington involved both researchers and clinicians working with numerous tropical diseases and included discussions of how discoveries are translated to applications.