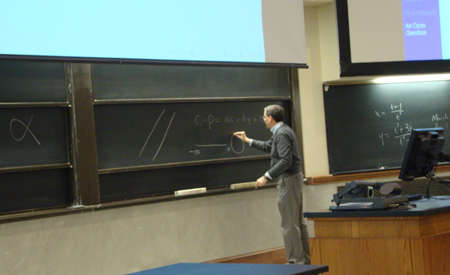 This past Thursday (Feb. 27) at the Math for Everyone lecture series, David A. Cox from the Department of Mathematics at Amherst College gave a presentation about the problem of counting lines and how they are tangent to four spheres of radius one floating in space.

Cox’s presentation consisted of examples of modern mathematics in a very concrete case of spheres and space. Cox also explained some of the ways these examples tie into other areas one might not consider, such as quantum field theory and mathematical physics.

He also gave an overview on how many lines can be simultaneously tangent to four spheres of radius one in three-dimensional space. To understand this problem, his presentation touched on a variety of topics like enumerative algebraic geometry and Bezout’s theorem, an example of enumerative algebraic geometry that involves the number of common points, or intersection points, of two plane algebraic curves. Cox ended the talk with an open ended question: Can four disjoint unit spheres have 12 real tangent lines?

“A lot of people have thought about this problem, and they still don’t know the answer,” said Cox.

Some of Cox’s research interests include algebraic geometry, commutative algebra, geometric modeling, number theory, and the history of mathematics. He earned a Ph.D. from Princeton University.

Math for Everyone is a series of math-related lectures, especially for undergraduates. The next Math for Everyone lecture, "The Shape of Information," will be held on March 20 at 5:00 p.m. in 105 Jordan Hall of Science.