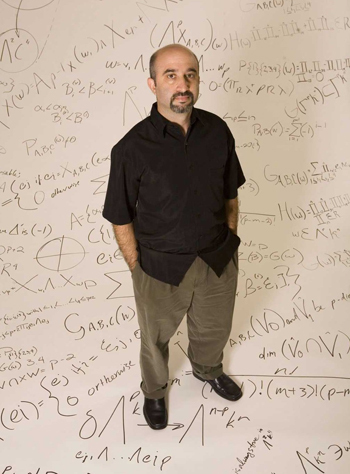 This past Thursday (Nov. 7) at the Math for Everyone lecture series, Alex Kasman from the Department of Mathematics at the College of Charleston gave a presentation about soliton theory, which combines algebra and geometry with the study of waves and elementary particles.

Kasman opened his presentation by explaining the origins of the theory. Solitons, self-reinforcing solitary waves, were first discovered by Scottish ship designer and civil engineer John Scott Russell in 1834. One day Russell observed what he thought was a solitary wave on a Scottish canal and decided to study this phenomenon further. However, the response from the scientific community was extremely negative.

Recently, however, the importance of the theory has resurfaced. Russell was ahead of his time and the math needed to fully understand his discovery did not exist until the 20th century. Soliton theory is still an active area of research today and provides a better look at a side of both math and theoretical physics and has found applications in diverse fields such as molecular biology and telecommunications.

Mathematicians and scientists are now recognizing and creating soliton equations and applying them to math, the sciences, and engineering. Some equations that revolve around this theory include the non-linear Schrödinger equation which involves applications to optics and water waves, the sine-Gordon equation that models positrons/electrons in one dimension or frictionless coupled pendula, and the bilinear KP equation which focuses on ocean waves.

“Russell made an important observation; you can notice something that you might think is important, even though no one believes it,” Kasman said.

Math for Everyone is a series of math-related lectures, especially for undergraduates. The next Math for Everyone lecture, "All Tied Up in Knots" will be held on December 5, 2013 in 101 Jordan Hall of Science. Everyone, from Fields medalists to math phobes, is welcome to attend