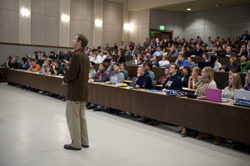 Dave Richeson, associate professor of mathematics at Dickinson College in Pennsylvania, presented a brief history of lines and circles, “Four Tales of Impossibility,” to an overflowing crowd of students in the Jordan Hall of Science on Nov. 10. The talk, part of the Math for Everyone series, traced the millennia-long effort to prove that a circle cannot be squared, a cube cannot be doubled, not all angles can be trisected, and not all regular polygons can be constructed using only a compass and straightedge.

The problems date from the time of Euclid, about 300 B.C.E., and the limit to compass and straightedge is connected to his first five postulates, Richeson said. They were not all solved until the 19th century, following dramatic changes in the approach to mathematics in the 17th century. “The Greeks had a very geometric way of doing math. Even by the time of Newton, geometry still reigned,” he said. Descartes introduced numerical results from adding, subtracting, multiplying and dividing segments and taking square roots, mathematicians had imagined that the multiplication of segments created the area of a geometric rectangle, for example, and the addition of x and x2 did not seem to make sense.

A number is constructible if and only if it can be formed from integers using addition, subtraction, multiplication division and square root, Richeson said. The proof that the cube cannot be doubled, some angles cannot be trisected and some regular polygons cannot be constructed involves showing that roots of certain third degree polynomial equations are not constructible. The proof that the circle cannot be squared came in 1882, when Ferdinand von Lindemann proved that pi is transcendental, meaning that it is not the root of any polynomial.