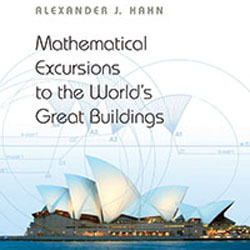 “Mathematical Excursions to the World’s Great Buildings” by Alexander Hahn, professor of mathematics, has won the 2012 PROSE Award in the architecture and urban planning category.  The book was published by Princeton University Press in 2012.

“Mathematical Excursions” discuss the pyramids of Egypt; the Parthenon in Athens; the Coliseum and Pantheon in Rome; the Hagia Sophia; historic mosques; great Romanesque, Gothic and Renaissance cathedrals; some of Palladio’s villas; the U.S. Capitol; and three icons of the 20th century: the Sydney Opera House, the Gateway Arch in St. Louis and the Guggenheim Museum in Bilbao. 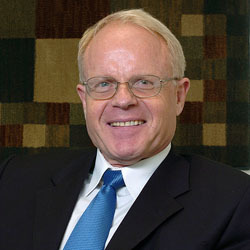 The book describes these famous structures in ways that can be analyzed mathematically.  The mathematics used throughout the book is central to the basic college curriculum: geometry, trigonometry, properties of vectors, coordinate geometry in two and three dimensions, and basic calculus.

Hahn’s research has primarily focused on algebra, but more recently he has explored the history of mathematics and science. He is also interested in the connections between elementary mathematics and other disciplines, which prompted him to write “Mathematical Excursions.”

The American Publishers Awards for Professional and Scholarly Excellence (the PROSE Awards) annually recognize "the very best in professional and scholarly publishing by bringing attention to distinguished books, journals, and electronic content in over 40 categories."

This year’s competition attracted 518 entries of books, reference works, journals and electronic products and represented a fifth consecutive year of a record-breaking number of entries from a total of 70 publishers across the United States and abroad