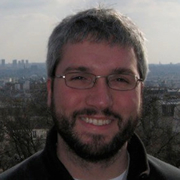 Christopher Porter, who recently completed his Ph.D. in the joint program in mathematics and philosophy, has received an International Research Fellowship from the National Science Foundation to conduct mathematics research for two years with Laurent Bienvenu at Université Paris Diderot. Porter's project, “Randomness Preservation and Randomness Extraction,” is in the field of algorithmic randomness, a discipline lying at the intersection of computability theory, probability, and information theory."

Porter has been working in Paris in each of the last three years as part of the "Ideals of Proof" program organized by his philosophy advisor Michael Detlefsen.  During this time, Porter began his collaboration with Bienvenu, culminating in their article “Strong Reductions in Effective Randomness.” Porter’s mathematics advisor is Peter Cholak.