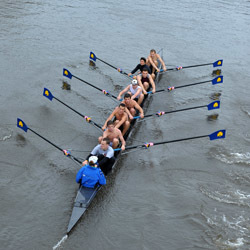 After standing by his side throughout his father’s battle with pancreatic cancer, Joe Boyle continues to fight back for him. When his father passed in October of 2014,  Boyle knew he wanted to take a stand against the cancer that had taken a loved one from him.

“The best way I know how to deal with things is to fight back, I don’t really like to wallow in grief…I decided early on that I wanted to do something,” he explained.

Boyle has always had a passion for using his athletic abilities for good. Ten months after his father’s diagnosis, he ran the Bank of America Chicago Marathon, raising $8,000 in support of his father for the American Cancer Society. As a member of the Notre Dame Men’s Rowing Team, Boyle began thinking about how he could use the sport of rowing to make a difference. When approached by a fellow teammate with the idea to put on an “ergathon,” he knew this was his way to “fight back” in memory of his father. 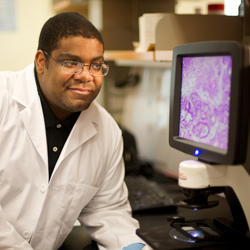 Immediately, Boyle began discussing this idea further with teammates and his coach, and started contacting others who could help make this happen. He joined forces with the coaches of the women’s rowing team, the faculty at RecSports, and Prof. Reginald Hill at the Harper Cancer Research Institute whose unique perspective and approach to pancreatic cancer research holds great promise for improving treatment of this devastating disease.

Their efforts came together, and on Feb. 7, 2015 (Sat.) the first annual Joseph D. Boyle Memorial Ergathon for Pancreatic Cancer Research will be held. Boyle and his fellow teammates are raising money through pledges from supporters on a per-500 meter basis or from flat donations. With a team goal of raising at least $6,000, they will have four hours to row approximately 30,000-40,000 meters, raising an amount based off of their pledges. Boyle has decided that this money will be donated to Prof. Hill’s lab to directly fund his research.

“I’m very grateful for Notre Dame in supporting me and my family through this. The Harper Cancer Research Institute has been great, the rowing team has been especially great. I’ve had a lot of gratitude in my heart,” Boyle shared.

As the date of the ergathon approaches, all donations are welcome and extremely appreciated. If you want to get involved, donations can be made on the Notre Dame Men’s Rowing website. Come out on Feb. 7 and help Boyle and his teammates raise money for pancreatic cancer research.

Originally published by Angela Cavalieri at harpercancer.nd.edu on February 04, 2015.