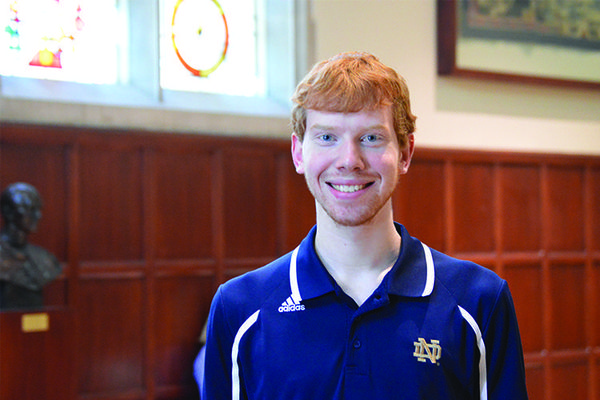 Junior Physics and Math double major Michael Foley was awarded the Chambliss Astronomy Achievement Award medal for his presentation at the American Astronomical Society (AAS). The Chambliss Astronomy Achievement Student Awards are given to recognize exemplary research by undergraduate and graduate students who present posters at AAS meetings. The meeting, which was held in January, welcomed 113 undergraduate students into the competition from schools all across the country including Yale University and Harvard University. Of those 113 students, only nine were honored the Chambliss award for their work.

Pursuing a concentration in astrophysics, Foley presented research he conducted last summer at the University of Chicago’s Kavli Institute for Cosmological Physics by means of a generous grant from the Glynn Family Honors Program. His research is focused on the Foundation Supernova Survey. “This is a new low-redshift supernova survey that uses the Pan-STARRS telescope to measure distances of Type la Supernovae in the Hubble flow. It will be used in the coming years to further constrain the Hubble constant and fulfill the WFIRST low-redshift sample requirement for measurements of dark energy.” Foley is grateful for his opportunity to research at the University of Chicago. “The opportunity would not have been possible without the support of the Glynn Family Honors Program, Professors Dan Scolnic and Rick Kessler (my mentors at the University of Chicago), and Professor Peter Garnavich. This experience enabled me to immerse myself in fascinating research, establish strong contacts with people in many different fields of astrophysics, and gain valuable insights into what it means to be a graduate student.”

Before presenting at the AAS meeting, Foley had ample practice presenting his research projects on campus and abroad during his undergraduate career. He has worked with physics Professors Grant Mathews and Justin Crepp in updating uncertainties in Big Bang Nucleosynthesis and writing code for the iLocater planet-finding spectrometer, respectively. “I have been able to present different aspects of this work at a cosmology conference in Canada, COS-JAM, FURF, and a nuclear astrophysics summer school in France. The opportunities offered by the College of Science for presenting undergraduate research allowed me to hone my presentation skills and made me much more confident in attending professional conferences such as the AAS.”

Going forward, Foley is optimistic about where he can go from here. He is currently studying abroad in Chile where he is continuing his research. “This opportunity has cemented my interest in supernovae and allowed me to think seriously about pursuing this area of research in graduate school and beyond due to the wonderful advice offered to me by many of the astrophysicists I met there.”

The AAS, established in 1899 and based in Washington, DC, is the major organization of professional astronomers in North America. Its membership of about 7,000 individuals also includes physicists, mathematicians, geologists, engineers, and others whose research and educational interests lie within the broad spectrum of subjects comprising contemporary astronomy. The mission of the AAS is to enhance and share humanity’s scientific understanding of the universe.