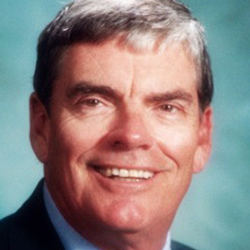 Walters has previously served as president of the Casualty Actuarial Society (CAS), chief actuary at Insurance Services Office, and senior partner of Wills Towers Watson. Walters earned a master’s degree in mathematics from Notre Dame and is currently the leader of a Notre Dame regional alumni club.

In his talk, Walters advised students on the nature of actuarial exams, education, and career prospects. When speaking of the exams Walters cited his experience as education chairman at CAS, and told students not to be discouraged by the four to five hundred hours of studying required for each test.

“The exams are doable,” Walters said. “And you do get perspective, because besides the math exams you have economics, accounting, finance, modeling, law… you’ll basically have the building blocks to do anything.”

Walter’s tips for success included taking your own notes on the study material, learning how to distinguish between important and trivial information, and the students’ favorite: going to the movies the night before.

Walters also reminded students that exams are not the end of an actuarial education. He explained that many skills required of an actuary are learned by experience, and gave an example of how he learned management skills from a summer internship at Prudential. He encouraged students to seek out these kinds of experiences themselves, and later gave tips on how to find them.

The talk also highlighted the positive career prospects enjoyed by the profession. “There are really no unemployed actuaries right now,” Walters said. He explained that with the high demand for actuaries, qualified fellows could work almost wherever they wanted, whether it be in major global cities or from their own home. “Where are you going to work? You can work anywhere.”

To give students a sample of the kinds of jobs actuaries can take, Walters described his own diverse professional background. This work included investigating the fairness of prices, assessing risk factors for insurance companies, and working with the economic implications of the Affordable Care Act. In all examples, Walters highlighted the unique ability of actuaries to assess large of amounts of information quickly. “When you’re an [actuarial] fellow, you’ve accomplished a lot…and you can get to the bottom of really any project.”