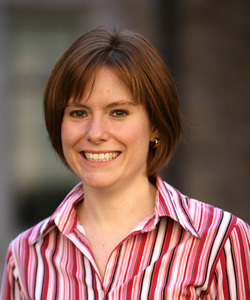 Indiana University announced on Monday (Jun. 8) that Molly Duman Scheel, adjunct associate professor of biological sciences at the University of Notre Dame and associate professor of medical and molecular genetics at the Indiana University School of Medicine-South Bend (IUSM-SB), is a Grand Challenges Explorations winner, an initiative funded by the Bill & Melinda Gates Foundation. She will pursue an innovative global health and development research project, titled "Small Interfering RNA Larvicides for Control of Malaria Vector Mosquitoes."

To receive funding, Scheel and other Grand Challenges Explorations winners demonstrated in a two-page online application a bold idea in one of five critical global heath and development topic areas that included development of the new ways to measure fetal and infant brain development.  The foundation will be accepting applications for the next GCE round in September 2015.

Scheel responded to the Grand Challenges Explorations call for new approaches to address outdoor/residual malaria transmission.  Disease vector mosquitoes, which transmit malaria parasites and other disease-causing pathogens, kill over a million people worldwide each year.  Due to poor progress in vaccine development and distribution, mosquito control is the primary mechanism for disease control.  Given the frequent development of pesticide resistance and known off-target effects of many pesticides, the current insecticide repertoire will soon reach its expiration date.  Her project aims to identify a new class of environmentally safe pesticides that will target multiple mosquito species before they are adults that can spread human diseases.

Scheel, whose research on mosquito developmental genetics is also currently supported by the National Institutes of Health and the Navari Family Foundation, has written some 30 peer-reviewed journal articles. In 2015, she was named one of three Research Frontiers Trailblazer Award recipients, an annual award for researchers from Indiana University and Purdue University who show great promise of becoming nationally and internationally known for their accomplishments in advancing the frontiers of knowledge. She earned her doctorate at the University of Chicago, where she also completed her postdoctoral training in developmental genetics.

Scheel’s project will be conducted in conjunction with colleagues at the University of Notre Dame Eck Institute for Global Health, including longtime collaborator David Severson, professor of biological sciences and director of the institute.  The Eck Institute for Global Health recognizes health as a fundamental human right and endeavors to promote research, training, and service to advance health standards for all people, especially people in low-and middle-income countries, who are disproportionately impacted by preventable diseases.  Scheel’s affiliation with the Notre Dame Center for Nano Science and Technology will also benefit the project, which involves nanoparticle delivery of small interfering RNA to mosquito larvae.

Grand Challenges Explorations is a $100 million initiative funded by the Bill & Melinda Gates Foundation.  Launched in 2008, over 1100 projects in more than 60 countries have received Grand Challenges Explorations grants.  The grant program is open to anyone from any discipline and from any organization.  The initiative uses an agile, accelerated grant-making process with short two-page online applications and no preliminary data required.  Initial grants of US$100,000 are awarded two times a year. Successful projects have the opportunity to receive a follow-on grant of up to US$1 million.

Indiana University School of Medicine-South Bend (IUSM-SB), one of eight partner campuses in the IUSM system, provides four years of medical education and hosts a faculty conducting world-class research in genetics, global health and cancer research. In partnership with the University of Notre Dame, IUSM-SB faculty also train graduate students in the biological sciences, chemistry/biochemistry, and engineering. The institutions collaborate on a joint M.D./Ph.D. program and an M.D./M.S. in Global Health.