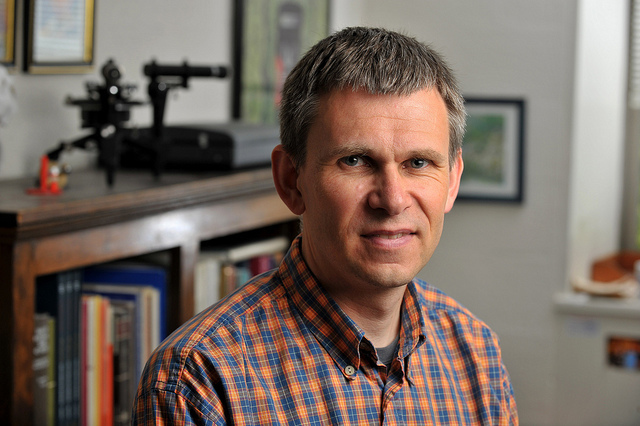 The American Physical Society (APS) recently announced that Morten Eskildsen, professor of physics, was elected as a Fellow for the society’s Division of Condensed Matter Physics. Eskildsen is one of 32 condensed matter physicists elected as Fellows this year and was selected from more than 6,000 physicists studying the field in the United States.  He was nominated for his insightful studies of the vortex lattice in conventional and unconventional type-II superconductors.

Eskilden research interests focus on understanding the fundamental properties of superconductors, especially in the presence of magnetic fields. When a type-II superconductor is placed in a magnetic field, it is threaded by swirling whirlpools of electric current known as vortices or flux-lines. The vortices behave like massive entities, and provide a unique probe into the nature of the superconducting state in the host material.  Understanding the behavior of vortices is crucial to superconductors as they are often the limiting factor in practical applications.  Eskilden is recognized as one of the leaders in the field of small-angle neutron scattering and its use as a tool for studying the magnetic structure of novel materials.

Founded in 1899, APS works to advance and diffuse the knowledge of physics through its research journals, scientific meetings, and education, outreach, advocacy, and international activities. The Division of Condensed Matter Physics was established in 1947 and is the largest of all the divisions in APS, concentrating on a broad range of applied and basic physics problems.  Fellows are nominated by their peers for their research, leadership and service to physics research or education. Notre Dame has 15 APS fellows on its faculty.