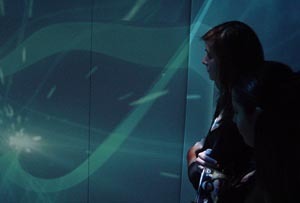 When Thomas Loughran heard that NASA was sending its mobile visualization unit to South Bend recently, he saw an opportunity to take a good thing and make it better.

The NASA mobile unit, called the “Vision for Space Exploration Experience,” gave viewers young and old a glimpse of NASA's plans for space exploration for the next 20 years through a simulated journey into space. It contained interactive videos and maps complete with holographs and motion sensors that gave participants the sense that they were flying through space, to the moon and Mars. The vision for U.S. space exploration is to advance U.S. scientific, security, and economic interest.

Science teacher Pat Mooney and QuarkNet administrator Anne Zakas pitched in to help organize the event. Mooney is coordinator of the Notre Dame extended Research Community (NDeRC), a new NSF-sponsored program of both the College of Science and the College of Engineering. NDeRC brought telescopes to the NASA unit, as did the local astronomical society.

At the same time, Notre Dame aerospace engineering graduate Mark Klem saw a request for speakers that was posted on a NASA website.  Klem is project manager for Propulsion and Cryogenics Advanced Development at NASA's Glenn Research Center in Cleveland, Ohio, and volunteered to be the speaker. “He is a double domer and has a daughter at Notre Dame in the architecture program, so it was natural for him to make the trip,” Loughran said. Klem, who is working with the space agency's lunar lander and Orion crew vehicle development programs, gave the first lecture at Jordan Hall’s Digital Visualization Theater on October 15. He was introduced by his former teacher, Prof. Steven Batill, the chair of the Notre Dame Aerospace and Mechanical Engineering Department.

In addition, Klem made a number of other presentations during the day, including one to Loughran’s research class at Saint Joseph's High School, to students at John Adams High School, and at the South Bend Rotary Club. 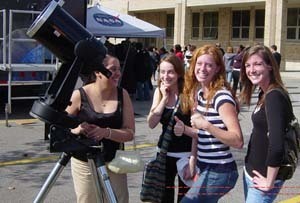