Tiny proteins found in the genomes of some types of bacteria are effective weapons against a wide range of other bacteria, opening the door for the development of new therapies in the age of antibiotic resistance, according to new research at the University of Notre Dame.

Francisco “Pancho” Fields, a fourth-year graduate student in the Department of Biological Sciences, studied some of the antimicrobial peptides, known as bacteriocins, inside bacteria found in mungbean seeds. Fields, the lead author on the paper published in February 2018 in The Journal of Antibiotics, completed his research with other colleagues in the lab of Shaun Lee, the Monahan Family Associate Professor of Rare and Neglected Diseases in the Department of Biological Sciences and the Eck Institute for Global Health.

The team sequenced the genome of a bacterial species isolated from the seed and discovered a portion of one bacteriocin, AS-48, would interact with the membranes of certain types of bacteria like E. coli. The researchers decided to capitalize on the characteristics that would initiate the interaction, then created 96 different variations of the peptide. Nine of those variations were more effective against a wide array of bacteria than the others. 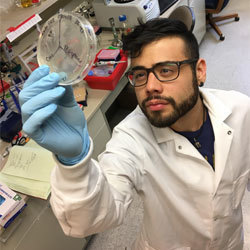 “It caused the bacteria to develop these little holes, and they started leaking their cellular content until they died,” Fields said, likening the cell death process to air leaking out of a balloon that had been stuck with a pin.

Though many different types of antimicrobial peptides have been explained in scientific literature, Fields’ and Lee’s study is novel because it was the first time that a library of peptides was designed from a circular bacteriocin, rather than from a straight chain. In nature, many of these proteins exist as circular forms, so using this approach assured that the team optimized the peptides to the point where they’re as effective as their natural counterparts.

Fields expects future antibiotic alternatives developed from their discovery could be used topically. For instance, burn wounds often become infected with Pseudomonas bacteria, which can be fought with this natural bacteriocin compound.

“We’re also excited about the potential of these optimized bacteriocins for agriculture,” Lee said. “Jeanne Romero-Severson [professor in the Department of Biological Sciences] and I originally found this bacterium in a foodsafe source of mungbean seeds. Because this was derived from a commensal bacterium in a plant source, it may have application as an agricultural product to prevent bacterial infection in plants and crops.”

The research was funded with an National Science Foundation Graduate Research Fellowship and a National GEM Consortium Fellowship to Francisco Fields, as well as an National Institutes of Health Innovator Grant to Lee.