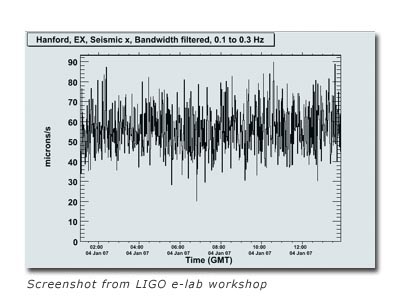 The Notre Dame extended Research Community (NDeRC) and Interactions in Understanding the Universe (I2U2@Notre Dame) hosted a National Science Foundation-sponsored workshop on August 10 and 11 in Jordan Hall. The workshop brought local middle and high school teachers together to study data from the Laser Interferometer Gravitational-Wave Observatory (LIGO) in Washington State and to learn how to use online e-Labs in their classrooms.

Tom Loughran, professional specialist in the Department of Physics who works at the QuarkNet Center, led the pilot workshop, one of only two in the nation. The teachers used the LIGO e-Lab, but they will also be able to use an e-Lab on cosmic rays that has been ongoing. Next year, an e-Lab in development for CMS, the particle physics detection at CERN is expected to join the offerings.

LIGO, designed to directly observe gravitational waves that have been indicated by indirect evidence, has not yet detected such waves. Teachers were studying seismic data that LIGO has collected, background noise that must be accounted for when researchers attempt to demonstrate that they have detected gravitational waves.

Teachers said they expect to use the e-labs with their students in fifth and eighth grades and high school. “I think it has tremendous potential. It’s another way to introduce waves,” said Mark Kirzeder, who teaches physics, chemistry and calculus at Marian High School and had not used earthquakes as a wave motion before. “It’s going to be a neat application.”

Mary Cook, Gail Kirkland and Janelle Moran, all fifth-grade teachers at Edison Intermediate Center, said the e-labs proved an effective introduction to scientific research. “It’ll be good for the students to act like scientists, to see the real tools,” Moran said. Salima Oudghiri, who teaches eighth grade science at Marshall Intermediate, said the workshop will make a difference in her classes. “There’s going to be a lot more online activities,” she said. “They can see a lot more how research is done, how scientists go about research.”