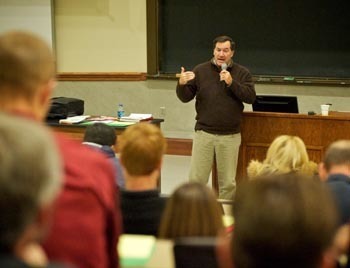 More than 120 K-12 teachers and administrators attended the fourth annual Notre Dame extended Research Community (NDeRC) Forum titled, “Collaborating for Education and Research” on Jan. 22 in the Jordan Hall of Science. The event offered opportunities for science, technology, engineering and mathematics (STEM) educators to exchange ideas and learn about more teaching tools and resources. U.S. Rep. Joe Donnelly, D-Ind., told the group that he supported the focus on education by taking the state teacher of the year, Penn High School physics teacher Stacy McCormack, to the State of the Union address.

Workshops at the event included genetics, particle physics, environmental science, nanoscience, biocomplexity, astronomy and biology. Most featured NDeRC programs for teachers and students, such as ENVIRO, GENO, ASTRO and BioEYES, a weeklong science unit that uses developing zebrafish to teach genetics and embryology at various grade levels. Presenters also described approaches to science teaching in K-8 and high school as well as the Research Experience for Teachers (RET) program available at Notre Dame.

In the Biocomplexity session, Tom Finke of Trinity School at Greenlawn and Mike Sinclair of the Kalamazoo Area Math & Science Center described their development, with Helen Dauetry of Elkhart Central High School, of web-based programs to teach biocomplexity. The group has been working with Mark Alber and graduate students in his laboratory for several years. They demonstrated the “Understanding Randomness in Biology” website where students can learn about probability and randomness in such activities as calculating pi or tracking the growth of Myxobacteria.

In ASTRO, presenters described preparations for the passage of Venus across the sun, called the Transit of Venus, on June 5, 2012, the last transit until 2117. Among other things, the event is an opportunity to show students how planets orbiting stars are discovered. It can be used to calculate the distance to the sun and other planets. This year’s summer program will focus on telescopes, including a new telescope expected to be installed on the roof of the Jordan Hall of Science.