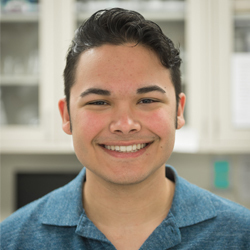 Dominic Acri, a junior neuroscience & behavior major and TESOL minor, has been selected for the Udall Foundation’s 2017 Tribal Policy Scholar. He is the University’s second-ever Udall Scholar (Lauren Eckert, an environmental sciences major was selected in 2013) and the first in one of the Native American categories.
“The Udall Foundation provides its scholars with the opportunity to make a meaningful change for native peoples,” Acri said. “I decided to apply for their tribal policy scholarship because it would allow me to learn more about the careers that integrate my passion for work in native communities and my coursework.”
The Udall Foundation awards scholarships to college sophomores and juniors for leadership, public service, and commitment to issues related to Native American nations or to the environment.On May 1, 2017, the Udall Foundation announced 50 students from 42 colleges and universities have been selected as 2017 Udall Scholars. The Udall scholarship honors the legacies of Morris Udall and Stewart Udall, whose careers had a significant impact on Native American self-governance, health care, and the stewardship of public lands and natural resources.
Acri a native of Harrisburg, PA, and a descendent of the Rosebud Sioux tribe, hopes to look for ways to integrate his coursework into his passion for Lakota culture. “Through doing environmental research that is accessible to policymakers, I hope to bring a new perspective to tribal policy that holds true to my heritage and paves the way for other Native American scientists who want to make a difference in their own communities.”
When asked what university institutes and programs helped prepare him for this opportunity, Acri expressed gratitude to many campus organizations. “The Balfour-Hesburgh Scholars Program introduced me to the intersections between community service and academic research that can have meaningful impacts in underserved communities.” He also credits his mentors in the College of Science, the Building Bridges Mentorship Program, and the staff at the Flatley Center for Undergraduate Scholarly Engagement in helping him pursue his own research interests and the implications they have for native communities.
Acri believes being a member of the Udall Scholars community will open more doors for him as he continues his educational journey. “After attending the Udall Scholars Orientation in Tucson this August, I plan to stay engaged with my Udall cohort and the Udall alumni network as I apply to Ph.D. programs that would allow me to continue my research in animal behavior and the practical applications it has for tribal land,” he said. After graduate school, he aspires to become a teaching and research professor working closely with tribal governments to shape policy regarding land and wildlife management.