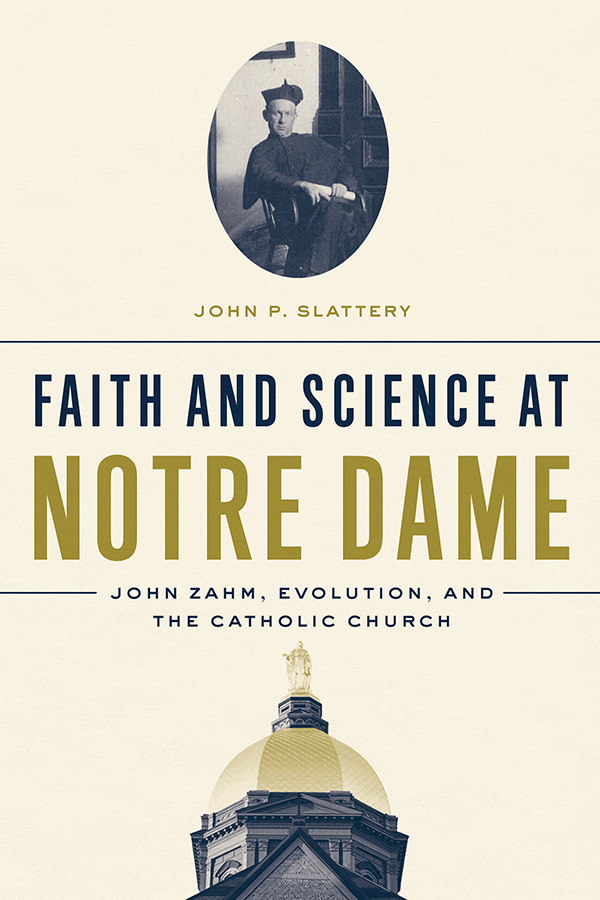 In this recently published book, Faith and Science at Notre Dame: John Zahm, Evolution, and the Catholic Church, John P. Slattery (ND ’17 Ph.D.) tells a new and fuller story of the Reverend John Augustine Zahm, C.S.C., (1851–1921) and his quest to prove the compatibility of late nineteenth-century evolutionary science and Roman Catholicism. Zahm was a Holy Cross priest, author, South American explorer, and a science professor and vice president at the University of Notre Dame, the latter at the age of twenty-five. Through his scientific writings, Zahm argued that Roman Catholicism was fully compatible with an evolutionary view of biological systems. Ultimately Zahm’s ideas were not accepted in his lifetime and he was prohibited from discussing evolution and Catholicism, although he remained an active priest for more than two decades after his censure.

John Slattery charts the rise and fall of Zahm, examining his ascension to international fame in bridging evolution and Catholicism and shedding new light on his ultimate downfall via censure by the Congregation of the Index of Prohibited Books. Slattery presents previously unknown archival letters and reports that allow Zahm’s censure to be fully understood in the light of broader scientific, theological, and philosophical movements within the Catholic Church and around the world. The book will appeal to those interested in Notre Dame and Catholic history, scholars of science and religion, and general readers seeking to understand the relationship between faith and science.

John P. Slattery is a senior program associate with the Dialogue on Science, Ethics, and Religion Program of the American Association for the Advancement of Science.

Faith and Science at Notre Dame: John Zahm, Evolution, and the Catholic Church